My Dot Picots have generated some interest in the last few weeks. This effect, along with practice pattern, will be shared with the Online Tatting Class soon. I take this opportunity to explain a bit of the background.

This new idea of making a single ds ring on chain came to my mind while working with two shuttles. To my wonder, a beautiful tiny dot was created and I just loved it. Instead of regular picots on a chain, I made tiny rings that sit above the chain. They are 1-stitch thrown (or thrown-off or floating) rings and since they are used in place of picots,
I called them Dot Picots. Video Link on How to make Dot Picots updated on 27.05.17

What a fortunate coincidence !
Dot is actually a vintage term used for tiny rings of up to 4 or 5 stitches only. http://www.bellaonline.com/articles/art3217.asp

Dots are also described by Muskaan in her blog
https://tipsaroundthehome.blogspot.in/2016/03/no-bullionying-over-tatting.html

So dot picot is basically a 1-stitch dot!
I practiced the Dot Picot by tatting self-designed motifs.
Few of them shown below. First two patterns already shared in the blog.
I will be sharing other patterns too. 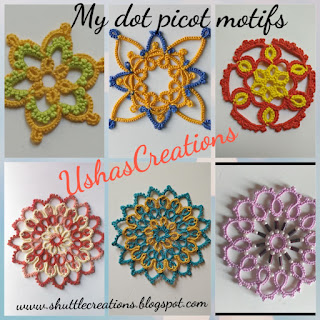 I also found that I could change regular picot motif into a dot picot motif too.
To name few, I tatted Rosemary Peel’s Heart
http://shuttlecreations.blogspot.in/2017/03/dot-picot-square.html 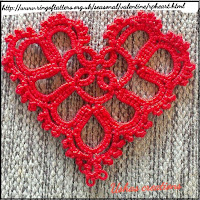 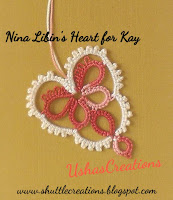 for transforming into Dot Picots.

Dot Picots are not possible on regular rings. They require a second shuttle and can be done only on chains and mock rings.

Tatting designer, teacher Nina Libin says, "I think Dot picots are really good for edgings, while decorative long picots may get squashed or distorted with use, Dot picots will hold the solid outline"

My IndianTatting group friend Shalmali Bapat says, “I liked dot picots not only for its delicate look but the uniformity it gives. Else maintaining same size of simple picots is bit tedious.”

As long as one is using 2 shuttles, decorative picots in any pattern can be converted to dot picots for an alternative effect. It will give your tatted work an ornamental look and they look like tiny beads. 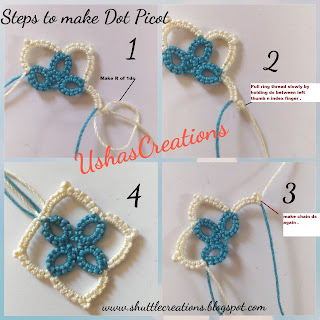 Before I shared Dot Picots online, I didn’t know much about the symbols and terminology in tatting. Experienced tatters Muskaan, Georgia Seitz and Nina Libin helped me a lot in choosing perfect symbol for the Dot Picot. They also guided me about already existing terms on similar technique like Dots, Knotted Ring Picots etc.

Karen Cabrera has tatted the same picots differently leaving bare thread on both sides of the double stitch, such that the tiny 1ds ring floats at a distance.
She called it Knotted Ring Picot in her Tatting Lesson 141.
here is the link  <https://www.youtube.com/watch?v=qYglW9SktsQ>

And here is a comparison of knotted ring picots and dot picots used in the same motif I shared above. 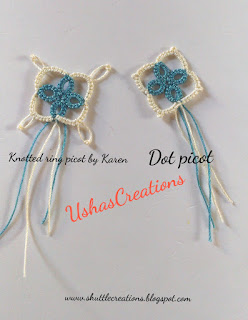 You can make out the difference between two types of picots in above pic. Karen has left some bare thread before and after making a double stitch. The ring is at the tip of a picot.

The Dot picot exactly sits on the chain without any gap, an easy alternative to beads.

I welcome your comments, queries, suggestions.