Pattern explained and updated on 25.05.2017-UPDATE
I am really thankful to Georgia Seitz for giving me the opportunity to explain my new Dot Picot technique in her Online Tatting Class OTC 2017 session. I hope some of you have tried the Dot Picot and now well acquainted with the technique.
I shared the video with tatters in Online Tatting Class of how to make a Dot Picot i.e. a thrown ring of only one double stitch. Here is the link for the same -  How to make Dot Picots.

Muskaan as you all know her, is a well experienced tatter who is the inspiration behind my blogging career. Muskaan helped me to prepare for the presentation for the class session. She drafted the layout and text of the PDF and drew diagrams for my Dot Picot Flower and Wonder Lilac Pattern DotPicotLilacPdf .She test tatted my both motif patterns and posted on her blog with perfect explanation.
A must visit: thumb-nailed-it

I had posted some Dot Picot motifs in my previous blog Dot Picots Explained !!!!!!!!!
Today I am sharing with you the Dreamcatcher medallion having outer round of dot picots and layers of contrast thread colors tatted in different sequence of rounds.
The pattern shown here is for Blue and Golden Yellow Dreamcatcher. Other two color variations are shown at the end of this pattern.

The medallion starts with the 2 outer rounds in  blue, tatted continuously by climbing out with split rings. Next we tat the 2 golden rounds separately - first the outer one, then the inner one. Here, lock join threads are made visible purposely to enhance the beauty of this design. The Dreamcatcher is finished off with the central blue round of rings 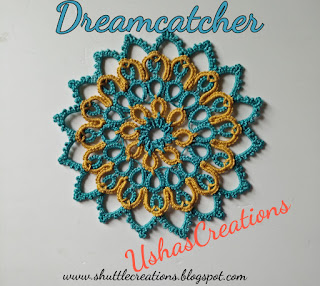 Pattern for my Dreamcatcher motif:
Two contrast shades of threads to show separate layers.
I have used Anchor 20 for both Blue n Golden yellow thread.
Detailed pattern given in this PDF Link
Updated Pattern 25.05.2017 in  PDFrevised

Tat Round 2 with Dot Picots and thrown ring 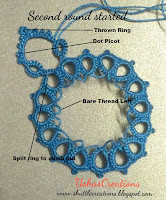 Round 3 is tatted over rings of second round in golden yellow
Wind shuttle with golden yellow thread and leave attached to ball, do not cut 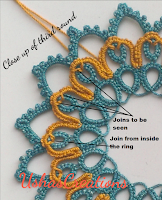 Round 5 is tatted over base of rings of Round 4 in blue with only single shuttle. 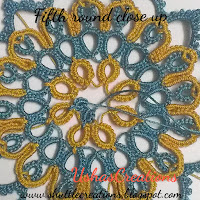 All rings should be tatted closer without gap.
Other variations in different colors 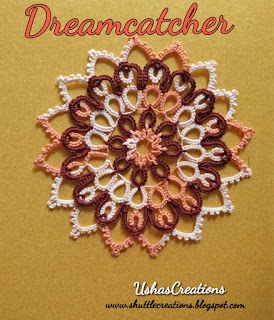 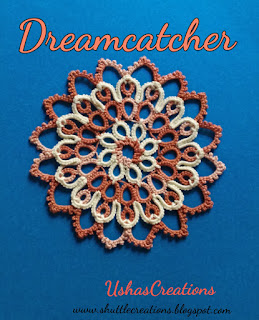 Catch the dream to tat this medallion and let me know your experience !!!
Your comments, suggestions are most welcome.