I am happy to share Charming Frills, the stunning effect created out of the combination of Long Picot(LP) and Catherine Wheel Join(CWJ). 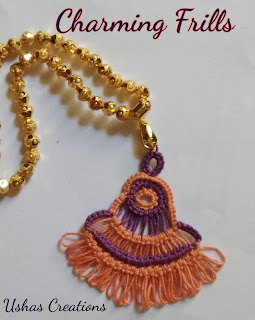 The idea of this pendant  came up after tatting the basic onion ring in two colors.
My first version was….... 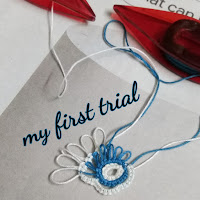 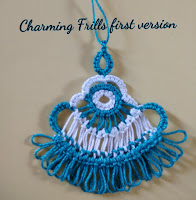 Muskaan helped me to find references of the effects of long picots tatted by other tatters. I started writing the pattern for the pendant with her. We both had lots of discussions online for naming this frill effect. Finally I used the notation lp_cwj for the presentation purpose. Layered long picots with Contrasting thread colors added beauty to the tatted pendant. The long picots tatted in multiples in consecutive layers gave beautiful frilled edging. This combo of Long Picot and CWJ can be used as a filler, multi-tiered, or as a frill/fringe.

Other joins like
1)    Catherine Wheel Join in Round 2
2)     Alligator Join in Round 3
3)     Picot Join in Round 4
have been used along with other techniques like Thrown Ring, Split Chain, Shoe Lace Trick and Switching Shuttles to tat in one pass.

Picot on the thrown ring can be used to add a jump ring, a pendant hook or an earring finding.


Working of this joining effect - lp_cwj is shown in the pic below. 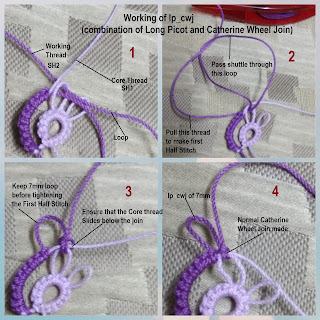 This frilled pendant is tatted in five rounds. Rounds 1-3 are worked in clockwise direction; round 4 moves from left to right and Round 5 moves from right to left, when seen from the front.

Its important to note the working of round 5, where we have to make the joins through the orange bars seen on backside. Insert a crochet hook through the orange bar from behind, pull up a loop to proceed.
Loads of thanks to Muskaan for test tatting Charming Frills and the immense help in finalizing the pattern. Kindly check her blog  to see her version of Charming Frills.
Using the same effect of lp_cwj, I tatted a medallion- Fringed Petals 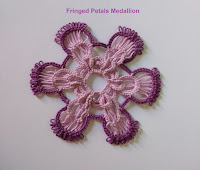 I invite tatters to test tat this medallion.
kindly e-mail me - shuttlecreation@gmail.com
Feel free to post your comments , suggestions here.